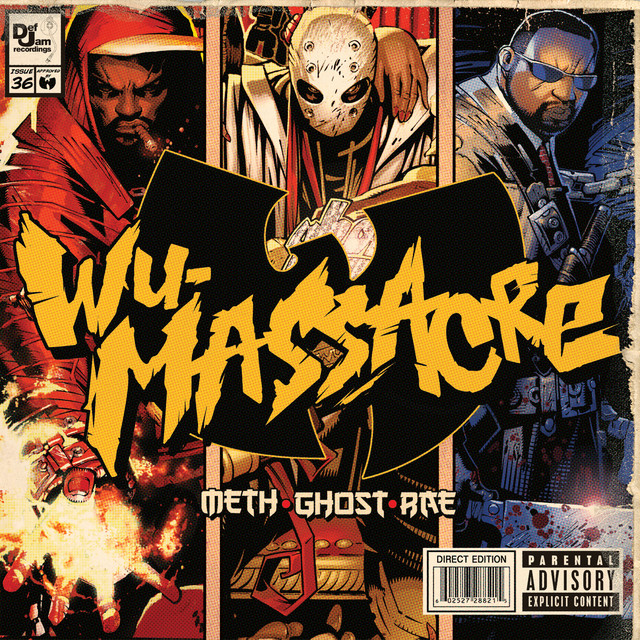 [Verse 1: Raekwon]
First of all, black park it, guns, we spark it
Hit you in the back of your dome, from far, kid
Dice kickers, gun clickers, run up in the bank for ones, quick
The drug dealer n***as, we flip 'em
Polo rugbies, flags on my hats, you love these
Knockout artists are one-piece
Fly in a foreign, all my money ties is tied-up
I'd rather sell coke, no bargain
Tough like a Hummer, fly like a Maybach
Spot runner, clap you in a gun shop, one up
f**k about police, we Park Hillians with gold geese
And everyday's a Sunday Easter
Cousins in Gaza, the new improved Shottas
Stretched out, mink on the floor, you hassa
We run through with turbans, diamonded up chain with boots on
Mori umbrellas in Tucson
Rhyming is a color, the lifestyle is live, my fly brothers
Something go wrong, we slug something

[Interlude: Raekwon, (Ghostface Killah)]
Chill my n***a, chill (I got this, I got this)
Make sure you handle that beat, you know what time it is
Body that beat, man, come on (Yeah)

[Verse 2: Ghostface Killah]
You can catch me anywhere, frost bitten chain
Bad dame, a thousand grams in Delaware
The smokeshop's is owls, laid back, hanging n***as to death
Word, you can call us coat racks
With 'giants' all around me like, Eli Manning
The b*t*h is on the block like, he died scrambling
Cuz L frames is crack, popped out, nina one of his eyes
Can't come back home, they locked out
All he did was re-up, hustle for kick money
Kept Beez all around him, thinking he sh*t honey
Bow, I'm into bobsleds, wasting large bread
Gucci helmet is blue, trim in his dark red
The rap TJ Swan, it's me Ason
If he don't spin my sh*t, break the DJ arm
And glide off like an escapade, renegade on ice
Lemonade Clark, the haze is nice
The Goldielocks, rocks sapphire, chain is right
b*t*h n***as, ya'll watch what ya'll say in ya mics, suckas

[Verse 3: Ghostface Killah]
It's like a body in a project hallway, who did it?
Who's the next n***a that sucked the snit-ich
That's my word, it could never be me
You see the deer head on the living room wall, like his neck fell off
That can be all sculptured and glazed with gloss
Call the shots that Bill Belichick would call
Snake n***as slither all in the glass house, racial slurs
When it's time to go to war, they cash out
Throw 'em in the rear-naked choke, they tap out
n***as try to surround the kid, I backed out
And threw two rocks at 'em, watching the ho drop
I'm from a place where we locking the low Glocks
Yellowtape, the bodies, jiggy and road blocks
Got the towels up in the air, it's so hot
Talking bout Staten Island, profiling
Switchblade city, the goons is wilding
Escape from my slums, n***a, you got talent
And we don't want the fifth of 'yac, we want the gallon

[Interlude: sample]
What you think I'm a f**king worm like you?
I told you, man

[Verse 4: Method Man]
Vacate black, bust gats, wherever we at
You all that, hit 'em in the chest, we fall back
I got mines, n***a, where yours at?
We call that, raw rap, got fiends in front of my door mat
That Witty Unpredictable fly sh*t, drive-by sh*t
These the n***as I ride with
And we gon' get cake, y'all, as soon as this pie split
Smacking up the dry snitch, n***a, you my b*t*h
Somebody put Tical on 'em, matter fact put Tical on 'em
One suuu, Staten Isle on 'em
I bank roll, I break codes, and I ain't trynna catch another case, case closed
Give me my crown, cuz I deserve it, real dudes giving me pounds
But not too close though, the semis' around
b*t*hes, running they mouth, goons, running your gate
My team running the block, cops running my plates
Well f**k that, Criminology rap
n***as hate, I hate back, floating in the flyest Maybach, n***a

Criminology 2.5 is taken from the album "Wu Tang Presents…Wu Massacre" by Ghostface Killah, Raekwon, Method Man. It has a duration of 01:59. The genres of this track are: Gangster Rap, Hip Hop, Rap, Southern Hip Hop, East Coast Hip Hop.
Other tracks from this album include: Criminology 2.5