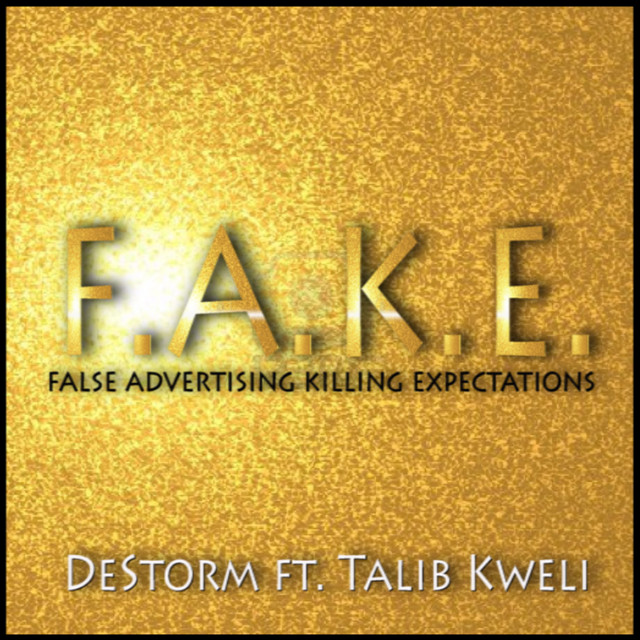 [Intro: DeStorm]
So I was trying to come up with an acronym for F.A.K.E
Cause that's half these motherf**kers out here
And I swear they be False Advertising, Killing Expectations
They false advertising, killing expectations

[Verse 1: DeStorm]
I see you got so many followers on Instagram
Thirteen likes, that’s an insta-scam
Two to three comments on your mentions, ma'am
Retire girl, get a better pension plan
That bell won’t save you, Kapowski
Go and tell 'em that bag from Canal Street
Those fake red bottoms you got 'em in the alley
Really? Louboutons on a four-figure salary?
Facebook frontin' like you winning out in Cali
But your bills being paid by some n***a in the valley
Driving his Coupe, he put you through school
Now you owe him head, you ain’t on Sally Mae
I talk 'bout these dudes, though
All the sh*t you say ain’t true, yo
You say you had a table at the supper club
With the ballers kickin' like judo
Lies, lies, all of these lies, Pinocchio, all of these guys
Swear you on your grind on the music biz
Telling every b*t*h you got a movie script
And that truck ain’t yours, it’s a rental
f**ked up teeth, n***a, focus on your dental (damn)
When shorty find out cause she's sure to find out
You ain’t got no words like a f**kin' instrumental
These men are just fake, these women are fake
Even your pastor and minister’s fake
We're all insecure, I don’t care what you say
Every n***a need a boost (energy shake)
And I ain’t gon' front like I don’t lie
Got 20 pairs of J's, four fly new rides
Coppin that sh*t that wasn’t in the budget
But I’mma say "f**k it" 'till I kick the bucket

[Verse 2: Talib Kweli]
Why you lying to the people?
Severe lack of trust like you eyeing through the peep hole
Thought you was bubbling like Liko
Living by the G code, really you informer like Deep Throat
Steady telling on yourself, you in trouble with police
Cause your whole time lying like a peep show
Now you're ma'f**kin' ass out
Get Deboed by the government with the repo
Your fake tales from the state pen
Have all been revealed now your publicist preparing a statement
f**k this, we ain’t hearing your case
Can you stare in the face of the death that you’re chasing
That’s like the emperor with no clothes
These hoes get exposed like the as*h**e naked
I gotta do some praying, hate is what’s left
In the place when trust gets taken
Dedication, real recognize real and I know it on a first name basis
Man, your sh*t is Fugazi
If truth is place I’m a native like a reservation
n***as swear they got beef like a butcher with blood on an apron
But they're faker than veggie bacon with they Miss Cleo accent
"Call me now," you're a blood clot, you're faking
I ain’t perfect, just working nonstop with no vacation
Feeling like a prisoner with no visitation
Angel in one ear, the other ear hearing the whispers of Satan
I’m impatient, so I’m taking it now, no waiting
f**k false advertising, killing expectations, hey!

F.A.K.E. is taken from the album "F.A.K.E." by Talib Kweli, DeStorm. It has a duration of 03:59. The genres of this track are: Hip Hop, Southern Hip Hop, East Coast Hip Hop, Hardcore Hip Hop, Conscious Hip Hop.
Other tracks from this album include: F.A.K.E.

Other Lyrics by Talib Kweli