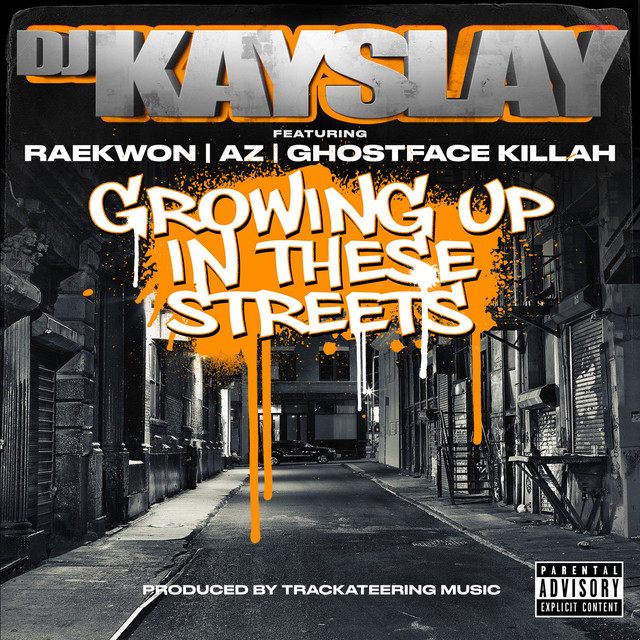 Growing Up In These Streets Lyrics

[Intro: Raekwon]
Word to mama, man, damn
Tryna get the f**k up outta there, huh?
It's real life, man
Just gotta keep your head in the right direction, [?]
Don't play with these n***as out here
Gotta be strong though
Only the strong survive, you heard?
Real rap, The Chef, yeah

[Verse 1: Raekwon]
Hey, yo
From blazin' chandeliers on throats, we gangstas with hope
With trappers in traffic, there's land on the coast
Pipelines be pumpin' nighttime with kilos dispersed
A bulletproof hearse in back of the church, see they grind
The timeline won't even last, they 25's, quick to spaz
Yeah, then flip on that ass
The block's burnin'
Narcs and sharks, thugs and drugs
Clogs and knots and rocks and parks
Hold your slime, I need money
But hate bein' the stickup kid
'Cause what I did could have cost me a whole lifetime
And everybody knowin' everybody
n***as in front of the lobbies until bodies drop
How he got lined?
Keep it movin', keep your loved ones movin'
See, we started a movement
I guess we Grand Groovin', y'all
Checks the shines until then we fine
Cash rule everything around mine in the mind
Now rewind, yo

[Break: Raekwon & AZ]
What is it?
Real-life
Huh, traumatizin'
Word up
Concrete jungle
The real question is
What I didn't see, ha ha

[Verse 2: AZ]
Uh
Days to decades, the drugs raids to sex craze
From Fruits Loops and leche made it to head jefe
Fiends on check day, murder scenes when the TEC spray
The segue, you gotta have sight beyond the X-ray
Pump shotties, slump bodies in front lobbies
Young hotties gettin' drunk hoppin' in Mazzies
Blunt robberies, n***as owin', tip toein', it's sick
Been in the mix since Slick Rick flowin', legit
Lost for words when they offed the homie Surge on the jooks
My whole outlook on life was blurred
Them corner curves just bein' there, ain't even fair
And as far as leavin' there, if you do, I don't even care
Seen it all from Sutter Ave to Seton Hall
East Elmhurst to Eaton wall, we grieve and more
Same song just sets changin', rep claimin'
From sellin' crack to rap, I kept aimin'

[Verse 3: Ghostface Killah]
Shootouts, unexplainable murders where sh*t runs deep
Late-night commotions, the neighbors can't sleep
That's why I pose in the flicks with my heat, one deep
I got burners all over the place like a song leak
My man open arms for a hug, I'm reachin'
I gotta tell myself take your hand off the grip, they greetin' (Get off the gun, man)
Automatic spit like a dumb b*t*h with a tongue ring
It's classic like them DAT machines up in [?] King (Woo)
Death before dishonor, we pray for your mama
She don't never have to pick a killer's face in a lineup (Nah)
His criminal lawyer, his face resembles a young Oscar De La Hoya
This kid's attorney is torture
In these streets, dust heads big bags of [?]
Like a skeleton sucked in, they bones is weak
Miss ya, ATF come through swingin' that big sh*t
No Popeyes, they here to put two in your biscuit

About Growing Up In These Streets

Other Lyrics by N.O.R.E.